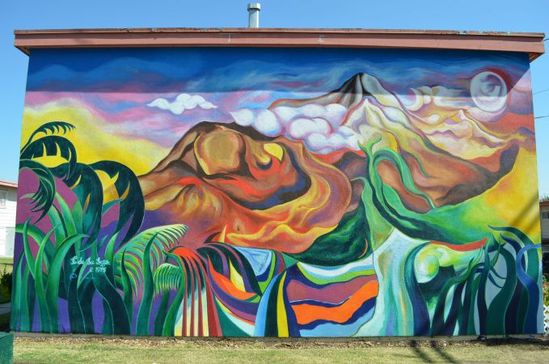 Ernesto De La Loza created “Organic Stimulus in 1975 as part of the Estrada Courts murals. The significance of this mural is that its abstract component is able to send a message of softness, care and connection to nature. By humanizing the community whom are often worked long hours and not enough paid. This is reflected that some residents have too relied on public housing. Making the importance of having an environment desirable to the residents to live.

The existence of organic stimulus mural is a form of defiance towards the dehumanization of communities of color. De La Loza explains the mural as a space beyond the surfaces. A social issue that is address is looking at the community beyond their economic hardships acknowledging the organic components of the community these are the wealth that they have navigating the social institutions. The bright colors and organic forms provided a sense of humanity (De La Loza).

A technology is a device that transcends the problems of the society to make human experience meaningful. According to this definition mural is also a technology since it transcends socio-cultural and political problems through its depiction and representation. Jonathan Sterne, Mary S. Pillegi, and Cindy Patton “ propose that we think of technical objects as the ‘crystallization of social practices’ and thus shift the study of technology to a study of the historico-social practices that induce their ‘precipitation’” (Pillegi and Patton 319). It is emphasized that technology is not simple at all, in fact it transforms society; the murals in East L.A. transforms society through the fact that they empower the citizens of the area. “Technology commonly considered as equipment, facilitates the production of certain goods. It requires the input of certain raw material which, mediated through a device, is transformed into a “new” product. In turn, this product is thought to meet certain needs that we might have” (Sheth 2). If we consider mural as a medium that takes human experience as input and transforms it into aesthetic depiction of that experience as output, then it creates awareness in the society by addressing some issues and it help influence people’s views on that specific issues.

Technology does not always have to be a device; it can be a method or medium through which the message is delivered. ““The medium is the message” because it is the medium that shapes and controls the scale and form of human association and action” (McLuhan 2). It is not the machine (medium), but what one does with the machine (medium), that is its meaning or message” (McLuhan 1). Around the world visitors are drawn to visit murals painted on walls that express something about the politics, heritage and identity of the locations being visited. In some cases murals created for political purposes, to express a particular viewpoint, become a point of interest for visitors.

“Murals in Los Angeles were the first artistic medium to support and then shape a movement toward identity and justice that reached a mass population. This artistic occupation of public space forged a strong visual presence of a people who at that time (late ’60’s, early ’70s) lacked representation in public life, with neither voice in elections, nor elected representatives” (Baca 2). “Many of the early Chicano Muralists were the first generation with advanced degrees in their communities, a racially unsophisticated society, tied the Chicano artist to the conditions of the barrios, or Latino neighborhoods regardless of their educational status. SPARC was born of the spirit of this movement, taking its name from the notion that it takes only a spark to start a prairie fire. The organization has been intent on nurturing this healthy fire within the city as a whole for 25 years” (Baca 4). “This new social power was not limited to immigrant labor nor indigenous people, but spread to the multiplicity of Los Angeles populations. African American, Thai, Chinese, Jewish and women’s murals began to appear on the streets of Los Angeles. Before long, community murals began to attract media attention and documentation. Murals began to tackle larger issues of police brutality, border crossings, drug addiction gang warfare, and other difficulties of a life of poverty and exclusion” (Baca 4). Thus murals in Los Angeles became an important part of portraying diversity of its population and their political, socio-cultural and economic issues.  Alfred Gell comments that “all those technical strategies, especially art, music, dances, rhetoric, gifts, etc., which human beings employ in order to secure the acquiescence of other people in their intentions or projects. These technical strategies-which are, of course, practiced reciprocally-exploit innate or derived psychological biases so as to enchant the other person and cause him/her to perceive social reality in a way favorable to the social interests of the enchanter” (Gell 7). Murals fall into the category of art that manipulates the minds of people to perceive reality the way the artists want them to perceive it; therefore it works as a technology for the artists to communicate the social struggles they have been through.